The anniversary that wasn't to be

This is a scene from the conclusion to the Shinobi Saga, Ripples (which is still in editing). It was cut from the first draft . . .but I'd love to find a place for it. Just in case it doesn't survive, though, take a peek and let me know if you'd like to see it included. 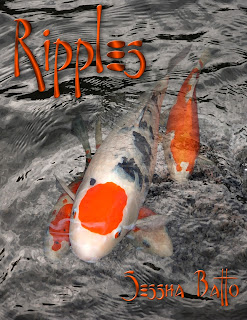 Makoto’s mouth went dry at the sight of the shadow wolf lounging in the door frame of their room with a predatory look on his face. “Sit.” Yoshi maneuvered the interrogator onto the bed on the opposite side of the room.
"Shi-kun, what’s going on?” The shadow wolf merely kissed his forehead and strolled back to the other side of the room. Makoto certainly enjoyed the view, his husband looked absolutely edible in a loose white silk shirt and a pair of fitted black pants, a black silk scarf wrapped around his face.
"Just stay there,” he crooned. “I have a surprise for you.”
The interrogator jumped when low sultry music started playing, and his heart sped up to match the beat when Yoshi’s hand moved to the top button of his shirt and he realized what was going to happen. He continued to stare, mesmerized, as a hand slowly traveled down and flicked open one button after another, allowing tantalizing glimpses of alabaster skin.
Yoshi turned his back to his husband and slipped the scarf free of his face, tossing it over his shoulder as he cast the seated man a sultry smile. Makoto wondered if his pants might catch fire when the shirt finally slid free of broad shoulders, leaving him with a view of a pale, perfectly muscled back criss-crossed with black leather straps.
So distracted was he, that he didn’t notice the hand slowly unfastening black pants until they slid down toned legs and the interrogator’s blood pressure spiked. Makoto’s mind desperately tried to process the image he swore was in front of him, the shadow wolf, bent slightly at the waist, dressed in nothing but black silk stockings, a black leather garter belt, leather collar and wrist cuffs and those maddening straps.
“Like what you see Ma-ko-to?” Yoshi sing-songed as he wiggled his ass enticingly. The interrogator was only able to reply with a guttural croak, eyes going wide when the shadow wolf spun in place and advanced to writhe erotically inches from his face.
“You said you wanted to see me in a garter belt and stockings,” he continued to tease as he rotated his ass. “But you don’t seem to like your present.”
Makoto’s finely honed control snapped and he snagged the lanky man and pulled him into his lap, grinding up into plush cheeks as he devoured the shadow wolf’s mouth. “You do know you drive me absolutely crazy, don’t you?” he mumbled when they broke for air.
“Then I guess you’ll have to punish me.” Yoshi stretched his arms out in front of himself, wrists together. “Would you like to cuff me?” He batted his eyelashes, watching in amusement as the usually stoic interrogator practically tore his own clothes off before settling back onto the bed.
“Actually, I think you need a good spanking,” Makoto growled, yanking hard on the outstretched wrists to pull the lanky form over his lap, smoothing a hand over pert buttocks before raising his arm and delivering a stinging smack.
Makoto could feel himself hardening even further at the sight of the reddened cheeks twisting and flexing as he delivered blow after blow, and if his moans and rock hard erection were any indication, the shadow wolf obviously was enjoying it as well.
Finally Makoto could take no more and he lifted the man in his lap and stretched him out face down on the bed, immediately diving in to nip and lick welted flesh, laving the sore area with soothing kisses. He impatiently spread the shadow wolf wide, burying his face between muscular cheeks to lap at his entrance, reveling in the fluttering pulses as he thrust his tongue inside.
“Mmmm, you taste good.” He flipped the lanky form easily, crawling up his body to capture his mouth in a dominating kiss. Makoto pulled back to look at the man beneath him. The shadow wolf looked thoroughly debauched, hair tousled, lips red and swollen, nipples hard, leaking erection bobbing in time with his heartbeat. "Wait a minute."

"Sweetheart, when did you get your nipples re-pierced?” he growled, watching in fascination as the little silver hoops moved slightly with each breath.
“I did it this morning after my shower. Do you like it?” the shadow wolf asked. “I wanted to surprise you.”
“Oh, I’m surprised all right,” Makoto replied. “But didn’t it hurt?”
“I've nearly had my dick cut off. I think I can handle a couple of piercings,” Yoshi said with a snort of repressed laughter. “Do you like it?”
“Very much.” The interrogator swept him into another oxygen stealing kiss, coaxing long legs to wrap around his waist. The shadow wolf let out a breathless sound as Makoto’s thick erection slowly pierced his ring until the head was encased in velvety heat. “Do you like this?” The torture master nuzzled the cords standing out on the long neck, nipping lightly and watching in fascination as red bloomed on the pale skin.
“Yessss.” Yoshi tried to move, growling in frustration when the interrogator kept him pinned in place, teasingly rotating the tip of his erection inside his tight passage but denying him any deeper penetration.
“Please, move,” he begged as he struggled, desperate for more stimulation.
“Not yet,” Makoto husked. “I want to enjoy your outfit.” With that he pulled out completely, lifting the surprisingly light shadow wolf and positioning him bent over the small table. His attention riveted on creamy cheeks, still bearing surprisingly erotic red hand prints from his earlier spanking, framed by the kinky leather garter belt. The interrogator's eyes lingered on the strip of tender flesh visible at the top of Yoshi’s thighs. The contrast between pale flesh and the silky black stockings sending his blood pressure rocketing until he could see his pulse in the throbbing of his cock.
Thick fingers stroked silky flesh before roughly spreading the reddened cheeks, thrusting into the shadow wolf’s tight entrance to the hilt in one swift stroke. “More.” Yoshi howled as his husband began a series of erratic hard thrusts to his prostate that had him writhing.
The scarred man grabbed a perked nipple between his fingers and began to play with the small ring, twisting and pulling it as he listened to the chorus of noises falling from soft lips. So absorbed was he, in fact, that he failed to notice just how close to orgasm the shadow wolf was, and he was caught by surprise when every muscle in the long body went rigid as his seed shot out onto the table.
“Like that, do you?” Makoto rumbled as he picked up the pace, slamming into the clenching passage as Yoshi jerked and writhed. He grasped the already hardening cock firmly and began a corkscrew motion, sliding easily in the thick cum coating the rigid length.
“Oh gods.” The shadow wolf moaned when a calloused thumb began playing with the slit, stretching and rubbing it before dragging blunt nails up the underside to scrape over the ridge. Yoshi came again with a strangled shout, and Makoto felt the tightening coil inside him snap as he came hard, roaring incoherently as he dove in and out of his husband’s hungry ass. He finally collapsed in a sweaty heap gasping for breath, pulling the pale figure backwards with him to lay panting on the ground, still buried balls deep inside.
“Happy Anniversary ‘koto,” the shadow wolf finally panted out, flailing his arms a bit as he tried to sit up.