New Release from Juliette Banks - Out of the Darkness 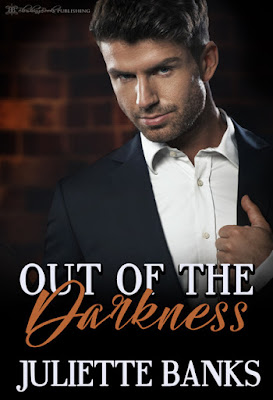 "I can't keep traipsing three miles every time I want to spank that delectable little behind of yours."
As a beautiful and famous model, she has the life many young girls dream of.
Yet the missing father; the predatory stepfather; the abusive lover; they all let her down, and damaged her judgement about the men she meets.
She thought she had met the man of her dreams, yet fate was cruel.
Until one day, at an airport, she meets the strong, yet kind, dominant man she had longed to meet.
Is he the man she has sought her whole life? Will he show her the way out of the darkness and into the loving, submissive relationship she has always craved?

Now on sale at Amazon for only $.99 for one short week 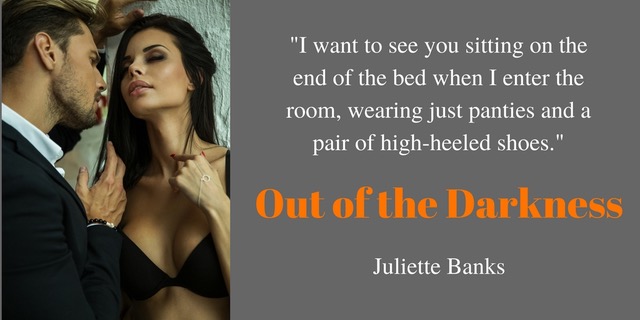 We were scarcely inside the door before William issued his first command. "Down. On all fours."
His instructions were given in a calm, quiet tone, but I knew that he meant business. I dropped to the floor immediately and waited, head bowed, awaiting further instructions.
"Crawl over to the middle of the room."
I crawled slowly on hands and knees across the room and stopped. For all my submission, I had never felt so powerful and sexually voracious. I heard William go over to the bar and pour himself a drink. I heard the clink of a glass stopper and knew he’d poured a whisky or brandy from one of the decanters on top of the bar. He walked back towards me and stopped a few feet behind me. He stood for perhaps a minute, without moving. I couldn’t see him but I sensed his eyes taking in the curve of my bottom beneath the silk dress.
"Lift up your dress. I want to see you." I shuddered with sexual anticipation and did as he said. I couldn’t resist arching my back and pushing out my bottom as I did so. Again he remained still, looking at me. Again he waited in silence for at least a minute.
"Exquisite." He left me where I was and went over to one of the armchairs and sat down with his drink, and said nothing for a couple of minutes. I was beginning to relax when he again spoke. "Anticipation."
He didn’t continue for a moment and I was unsure if I was expected to respond in some way, or whether this was an instruction of which I was unfamiliar.
"Anticipation is the key. You are anticipating what I might do with you. I’m anticipating the pleasure that awaits us. Our minds are slowly increasing the sexual tension. Don't you agree, Marianne, that anticipation is the key?"
"A man could go to war in defence of a body like yours, you know. You hold most men in the palm of your hand.” 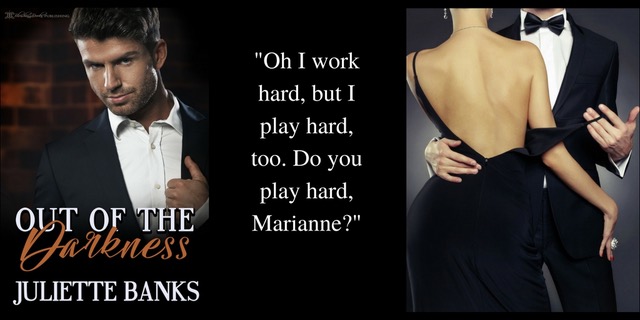 He took off my dress and my bra, and I sat before him, head lowered, ready to submit. "Stand up. Place your hands flat on the cushion of the other chair, and spread your legs, and wait for me to attend to you." I did as instructed and heard William get up and walk away, either to his bedroom or bathroom. I trembled, partly with nerves and partly with sexual expectation. One minute passed, then two. I remembered what he had said about anticipation. This was my time to anticipate what lay ahead, and the sexual need within me doubled in strength. I needed what this man was about to give me. I needed him like I needed air to breathe and water to drink. I lifted my bottom just a little higher and waited to be taken to heaven.
William returned. He had changed into his black jogging pants and t-shirt. He placed something down on to the arm of the chair, but I daren't look around. I remained absolutely still and silent. He bent over and kissed my back and ran his hand over my bottom.
"A man could go to war in defence of a body like yours, you know. You hold most men in the palm of your hand, even strict Doms such as me, and you have no idea of the power you have, do you? I don't think I have ever met another beautiful woman who has less awareness of her beauty as you have."
I didn’t reply. I don't think he expected a reply. I’d heard this before, and perhaps he was right. From childhood I had never been told I was pretty and grew up with the idea that I was quite ordinary. Even after I was discovered by the modelling agency, and became one of the world's top models, I never really believed that I was beautiful. I always thought my success was the result of a fluke, and that one day I would be found out and exposed as a fake. Perhaps the messages I’d heard over the years from men were at last starting to get through the barrier that I had erected around my fragile psyche.
My thoughts were interrupted by a sharp slap on my bottom by William's hand. I snapped my attention back to the present. Then came another stroke. I breathed deep. I was back in the zone where I wanted to be. All I could think of was this powerful, masculine man standing behind me, raising his arm and bringing his hand sharply and crisply down, warming my flesh and lifting us both to the joyful place of sexual excitement and passion.
William gave me about twenty strokes with his hand, before stopping and reaching between my legs. He plunged two fingers into my sex. I gave a deep groan in response to the sudden intrusion. A sexual tremor went from my pussy to my brain, and back again. God, I wanted this man so badly.
"Yes, Marianne, you want me as much as I want you, don't you?" "I want you so badly. Please fuck me, Sir." He didn’t reply, but pushed me down on to the chair, so that I was kneeling on the cushion and leaning over the chair back. I felt his hard body press up behind me and he pulled down his jogging pants. He leaned over me and I could feel his breath against my neck. He took the lobe of my ear into his mouth and gently bit on it, before kissing it.
There was nothing I wanted more than to wake up every morning next to him, even if I was tied to the bedpost.

"Do you like strawberries and cream Marianne? I’ve just tasted one and they are sweet and juicy."
"Yes, Sir." "Good. Open your mouth for me." He pressed a large strawberry, dipped in cream gently against my lips and I opened them to take a bite. When I had finished it I licked my lips. "You have a little cream left on your lip. Let me lick it off." His tongue swirled around my lips and removed whatever was there. "Now it’s my turn to eat one, and I plan to eat mine from a very special dish." I felt a strawberry placed on my stomach, in the dip of my belly button. "I'd like some cream on mine too." A small amount of cream was poured on top of the strawberry, and then William bent over and ate the fruit from me, licking around the skin to lap up the cream. I gave a soft moan, wondering if it was possible to orgasm from the simple effect of strawberry eating.
He fed me another strawberry, and this time he ate the next two from my breasts, making sure to lick the cream off thoroughly.
"There’s one more place from where I would like to finish dessert."
I guessed the place he had in mind. Sure enough his fingers went down between my legs and a large strawberry was pressed between the lips of my labia.
"You seem to be producing your own juice down here. I don't think this strawberry needs any cream. Would you like to taste yourself Marianne?"
The question didn’t require an answer it seemed, as William plucked the strawberry from its hiding place and placed in my open mouth. I could taste and smell my own excitement on the surface of the fruit.
"I think that the juice down here needs licking away, don't you?"
William went down between my legs and began to lick my pussy. I was on the edge of exploding with pleasure and he must have sensed it.
"I want you to come, Marianne. I want to watch you come."
He lifted his head, but his fingers remained to massage my clit, while he thrust other fingers inside me. I called out as the most intense feeling of pleasure that I have ever felt radiated out from somewhere deep within my groin and sent shivers and goose bumps to my extremities. I wanted it to go on forever.
William took off the silk scarf and saw my eyes were misted with tears, but they were tears of joy at the experience he’d just given me. He bent over and kissed me hard on my lips. I could see an expression of lust in his eyes. He hadn't finished with me yet.

Was it to be pleasure or pain this time, or perhaps a combination of both, given in the way that only he can?