Just a reminder to all the pundits, authorities, know-it-alls, complainers and whiners... 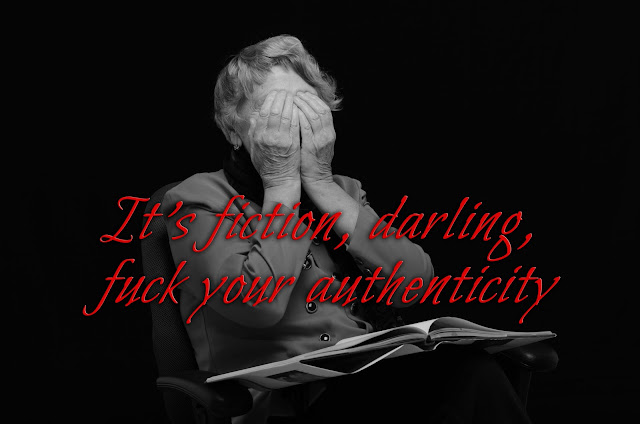 You have no authority to decide what anyone else should write or read...period. If you don't like, don't read. If you want to read something you cannot find, write it yourself. THAT is freedom of expression. We are damn lucky to have it. You have no standing to tell someone else what to write, or how to write it. You have no stake in the outcome, no horse in the race. Whining and complaining only makes you look like an idiot. So wise up, practice tolerance. Find what you love and promote it rather than trying to argue and browbeat someone into changing what they do. The world will be a much kinder, calmer place.
Posted by Sessha Batto at 10:52 AM 1 comment: 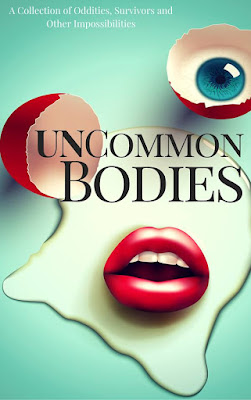 Yes, time does pass swiftly. Before I had time to blink, ARCs for UnCommon Bodies were in my mailbox! This is an amazing anthology from Fighting Monkey Press which includes: 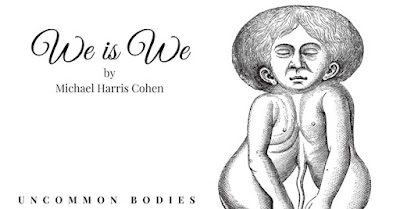 We is We By Michael Harris Cohen: We is we follows a day in Mary and Millie’s life, traveling sideshow freaks who’ve lost touch with the outside world. 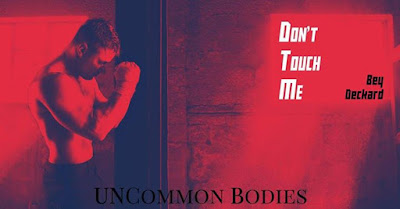 Don’t Touch Me by Bey Deckard: Fighting is what Beau does best, because the very thing he dreads is exactly what lends him the extraordinary strength to defeat even the worst odds. And he does it all with the help of his angel, the woman he longs desperately to hold… but can’t. 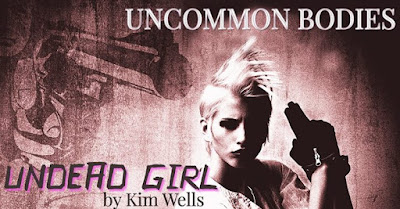 Undead Cyborg Girl by Kim Wells: When she wakes up undead after receiving a cyborg assassin upgrade surgical procedure, Undead Girl’s life is forever changed. Is it for the better? She has all the skills, but she needs a job, she needs some friends, and she needs to remember who she is. Part 1 of the Cyborg Story trilogy. 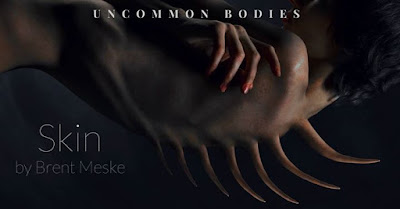 Skin By Brent Meske: After constant bullying in high school, Patricia vows to change her name and her entire being. When she gains the ability to mold and sculpt flesh, that vow very quickly becomes a terrifying reality. 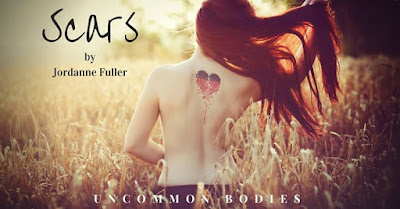 Scars: First Session by Jordanne Fuller: After a life of abuse, Abigail made the decision to cover her scars with tattoos. What she didn’t expect was to confront her emotional scars in the process. 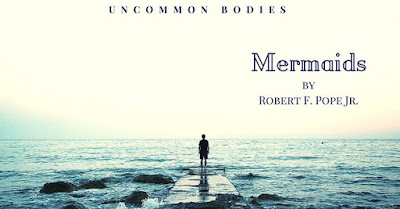 Mermaids By Robert Pope: Recently graduated from college, with no work prospects, Aqua-boy—so called because of the webbing between his toes—watches and listens to a group of musicians at a bar/restaurant when he notices the woman playing a diminutive red accordion has six fingers. 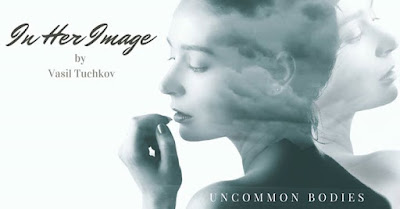 In Her Image By Vasil Tuchkov: An English PHD student arrives at the scenic but haunting countryside of Matera, Italy, looking for answers. His translator introduces him to a crippled local painter who claims to have depicted the impossible. As the three men converse near the ancient settlement’s caverns, a mystery unravels.

Three Poems By Deanne Charlton: It Runs in the Family, Brenga’s Body, Eternity in a One-night Stand 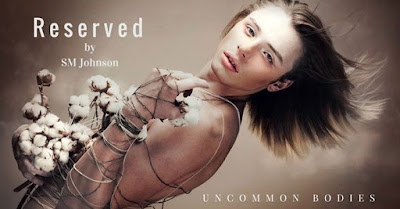 Reserved by SM Johnson: It’s been five years since the accident that killed Pete Spencer’s younger lover and left him grieving, bitter, and broken. He’s tired of his lonely world, but the kind of young men he’s attracted to dismiss him the moment their eyes land on his cane. Pete’s learned to hide behind the safety of his reserve, but he’s never met anyone like Rory. 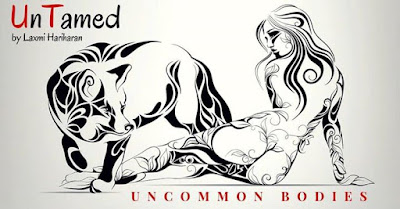 UnTamed by Laxmi Hariharan: Wolf girl Leana Iyeroy, the first half breed in her family, only ever wanted to be 100% human. An unexpected encounter with the Hugging Saint of Bombay, forces Leana to face the wolf inside her. 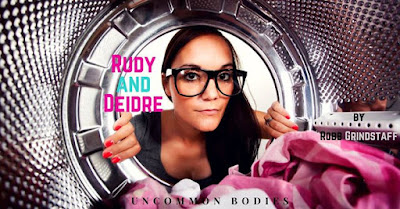 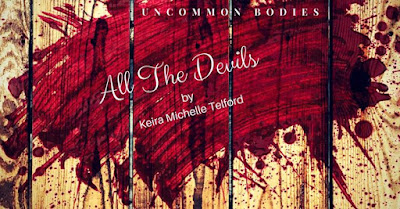 All The Devils by Keira Michelle Telford: It’s 1889, and women are being killed in the East End of London. They’ve become the targets of a deranged sexual killer, but why? Because they’re prostitutes? Sapphists? Or something else entirely? 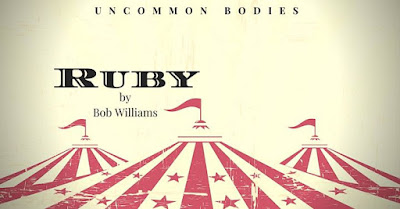 Ruby By Bob Williams: It’s nineteen thirty-six and the town of Ransom, Oklahoma is barely functioning after the “Dust Bowl” storm of the year before. Michael Wootten sits upon the porch of his dilapidated house and watches a caravan of trucks pull into town. Melvin Mitchell Presents: Ruby and her Amazing FreakShow Friends. Maybe this is just the thing to pump a little spirit into the near-dead town. But everything comes at a price, and Ms. Ruby always takes her cut. 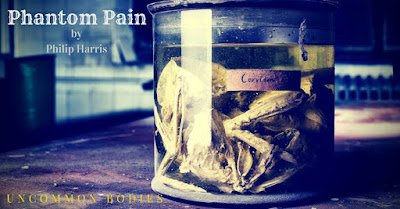 Phantom Pain By Philip Harris: Phantom Pain follows amputee, Mariana Jacobs, as she visits a man who claims to have information she needs. But that information comes at a cost. 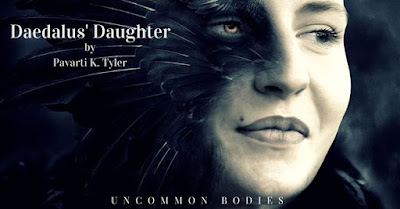 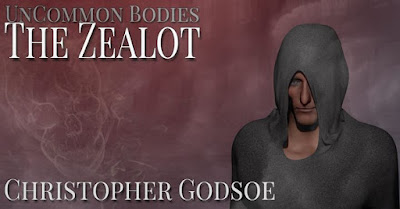 The Zealot By Chris Godsoe: Six months ago, Tobin Maldovan was in charge of a manhunt for an enigmatic hacker named ATLAS. He lost his man near the Canadian border after a high speed chase, but not before ATLAS pulled strings to transfer the woman he Tobin loves across the country, hampering any chance at reconciliation. With ATLAS having escaped his jurisdiction, Tobin had nothing left but to follow his wife to California, seeking reassignment at the West Coast cyberterrorism field office. His reputation preceeds him, and he has drawn the case pursuing a man the media has taken to calling “The Zealot.” As usual, Tobin pours himself into his work, but the work becomes personal in ways that he never would have imagined. 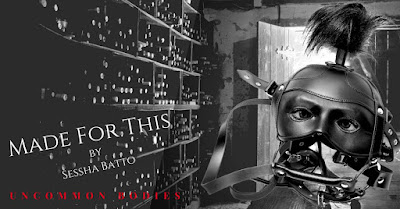 Made for This By Sessha Batto: On the heels of unimaginable loss comes reinvention. Sometimes the gain is worth going through hell. 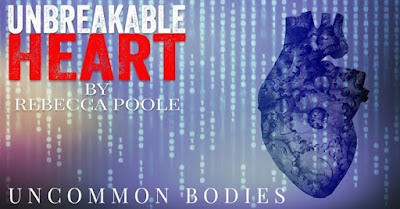 Unbreakable Heart By Rebecca Poole: A cyborg must escape her creators in order to survive. 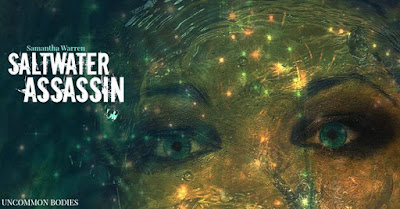 Saltwater Assassin By Samantha Warren: Syren has spent her life as a sideshow freak, caged in a tank of saltwater and gawked at by hundreds of normal humans. She has a secret, though. At night, when the lights are finally off and the fair goers leave, she turns into a human–a mermaid assassin. 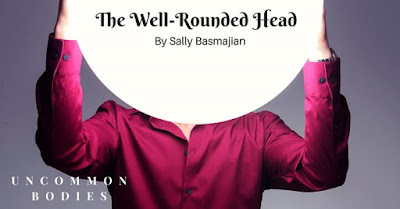 The Well-Rounded Head By Sally Basmajian: A woman is smitten with her husband’s big, entirely round head. One day she notices that his temples appear to be slightly indented, so that his head is no longer a perfect sphere. This revolts her, and she moves into their guest room in order to avoid him. When he breaks in, she kills him, in a most bizarre way.
Posted by Sessha Batto at 8:19 AM No comments: